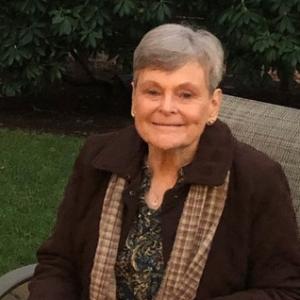 As the eldest of 6 children, 11 grandchildren, and 4 great grandchildren, it’s my privilege to summarize the long and inspiring life of my mother, Elise Clark, who passed on Sunday, March 27th after a brief illness. She was surrounded by family and embraced in Love. She was born Carol Elise Laubscher in San Francisco, California in 1938, where her grandparents had established a chain of delicatessens on Market Street. By age 12, she and her older sister, Joan, were working alongside their parents at Laubscher Brothers Delicatessens, and their saved wages allowed them and their younger brother, Louis, to attend Principia Upper School in St. Louis, MO, and then Principia College in Elsah IL. Through both she formed life-long friendships that, along with church, became the social network that underpinned her life. However, it was meeting my dad, Bruce Clark, at church in San Rafael, CA 1957, that set the trajectory for her next 65 years. They married in 1958. One of the initial challenges Mom faced for the sake of her new family was working the smelly delicatessen cheese counter while she was pregnant with me. Two years later, my brother Scott would be born on a foggy winter night in Sacramento, far from aromatic food service, where Dad worked in a printing shop.

Mom and Dad, though, would soon again anchor our idyllic childhoods in San Rafael, Terra Linda north of San Francisco, just minutes from Papa Lou and Gramma Dot, Mom’s parents, and a few miles from Larkspur where Pop and Gram Clark, Dad’s parents lived. With so much family support at hand, Mom and Dad took the unprecedented and unselfish step of adopting a family of my other 4 four siblings, Wendy, Keith, Tracy, and Todd in 1974. In 1978, Dad’s printing experience brought “The Clark Clan” a new opportunity across the country in Boston, MA, where they resettled initially in Framingham, then Hopkinton, and in retirement, Milford. In support of her large and active family, Mom worked 38 years for the First Church of Christ Scientist, in Boston. House by house, as we kids left and the homes downsized, the gardens grew larger and larger as Mom & Dad found a shared passion for gardening and home improvement, spending much of their discretionary time in seasonal yard work. Mom especially loved flowering things, and this of course ALWAYS included her children, nieces & nephews, grandchildren, and great grandchildren. It also included an unwavering commitment to her church whether in San Rafael, in Boston, or in Framingham. She loved watching all her kids grow-up, so late afternoons or on so many weekends my parents made new friends as they cheered at every possible local family sporting event, or by sending carefully curated seasonal “Special Day” boxes of treats to those away at camp, at college, or living complete lives on the west coast. Mom was not a telephone person. She was a letter writer. She kept mental index cards of bits of Clark Clan news of the month and then put these in letters, always in an upbeat way, to the core communicators in other parts of her network of friends and family, and a Special Day Box was incomplete without its letter. It was easy to find in her writings enthusiasm and compassion her quiet demeanor often belied in person. Mom approached everything the way a good gardener would, with mindful planting followed with readiness to quickly weed, proactively prune, and consistently water. She was an example of how attentively doing those often grubby little things every day would better ensure lovely growth in its season. She learned not to stake her happiness on her own outline of an outcome, preferring to carefully do or say what she truly thought helpful and then, as she was fond of saying, “let it unfold.” She focused on being alert, diligent, and consistent in daily acts of kindness that, in the way of a gardener, gave her the right to expect good results in whatever surprising forms these might take, and then she celebrated and generously shared the fruits and flowers along with everyone. With great intentionality, she chose to recognize and to be grateful for God’s hand in all outcomes rather than lay her worries on others. She never asked for much and by her example of reliance on God, held for us a high bar. Through our efforts to emulate this grace, she helped our lives and our characters wonderfully unfold.

The family is planning a private Celebration of Life for Elise/Wife/Sister/Mom/Aunt/Gram later in spring so it can be in a flowering garden. Arrangments are under the care of the Chesmore Funeral Home of Holliston, www.ChesmoreFuneralHome.com In lieu of flowers now, donations to the First Church of Christ Scientist, Framingham, MA or the Christian Science Benevolent Association, Chestnut Hill, MA will be greatly appreciated.
Howard E. Clark