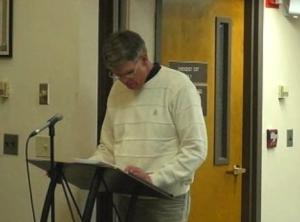 Chairman of the Capital Improvement Committee James Gosselin gave Selectmen a first look at the town’s Preliminary 10-year capital expenditure plan at their January 17 meeting. According to Gosselin, requests totaling $8.2 million have been submitted for review for Fiscal Year 2013, but no recommendations have yet been made.

As Gosselin proceeded to go through the list, Town Manager Norman Khumalo told the board that the presentation was preliminary and was intended to give them a heads up to the types of projects that might be in the pipeline.

The Capital Improvement Committee has met with several town departments over the last few months, including the School Department, the Department of Public Works, Parks and Recreation and Facilities. Included in the specific requests are $1 million to repair the Elmwood School roof, $266,000 for the school track, $25,000 for heating and air conditioning improvements at Center School,$250,000 for Phase 2 Sewer work and $641,000 for several Facilities requests, of which almost half represents Town Hall repairs and money for improvements to Reed Park.

But the $8.2 million is only the beginning. Preliminary forecasts for capital expenditures increase in later years. According to Gosselin, the projections for FY2014 and FY2015 show drastic increases, with FY2014 currently estimated at $42 million and FY2015 at $59 million. Replacement costs for Center School and the new library are some of the big capital projects that may be in the town’s future.

While Gosselin, who is a first time chairman of the committee, said he needed input about how the town would or could pay for some of these items before his committee could make recommendations, Appropriations Committee member Ron Eldridge said that it was time to start making tradeoffs, timing those tradeoffs and measuring the tax impacts.

“There are priorities in this town that have to be faced,” said Eldridge.

Gosselin said his committee was working on recommendations, but that they would not be ready before February 1. The committee currently only has three members and there is a possibility that one of the three will no longer be able to serve due to changes in his employment status.

“We are in desperate need of new members,” said Gosselin.

As for comments regarding the numbers, Brian Herr said they were staggering, but indicated that significant needs were being discussed. John Mosher was concerned about maintaining current assets.

“We have to be able to afford to maintain what we have,” said Mosher. “If not, we’ll have to dial back some of the plans we have, but I think there are some opportunities for consolidation.”

More details will become available as the FY2013 budget process continues. The Capital Improvement Committee is scheduled to meet with the Town Manager and Khumalo says he hopes to have the details two to three weeks ahead of the budget deadline.