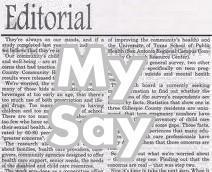 Editor,
I am voting for Jesse Mermell as the Democratic candidate for our Fourth
Congressional District. Here’s why:
In a field of nine Jesse stands out for her clarity on the whole range of progressive
issues – all of which make sense to me as a businessman:

• Economic growth through investment in environmentally modern industries. Call
it the Green New Deal if you must but investing in the future makes more sense
to me than continuing to subsidize the past.

• Health care is a right, not to mention an economic necessity. The Mad Hatter’s
tea party of drug companies, hospitals, doctors, lawyers, and insurance
companies all fighting to protect their special self-interests is no easy one to
break up or break into. Doing so is critical to reducing costs and improving
deliveries. It’s only good business!

• Bring immigration out of the penalty box. Recognize that immigration is the “gas”
in our economy. Establish fairness and humanity in U.S. immigration policy.

• Women’s reproductive health. Women make up more than 50% of the workforce.
Fairness in treating pregnancy, childcare, and birth control is overdue.

• Fairness and inclusion for gender, color, sexuality, and cultural identity. When all
do well, all do well.

Jesse has a long record of public service in local government, state government, and
issue advocacy which surpasses any in the candidate field -- Brookline Selectman,
Governor Patrick’s senior staff, Planned Parenthood, and Alliance for Business
Leadership. Speaking with her one on one, and observing her in two debate
performances, it is clear she knows how to carry herself. Jesse is clear spoken,
informed on the issues, and focused. She will be a powerful advocate for 4th District
concerns on the floor of the House.

Jesse can wear the mantel of Barney Frank and Joe Kennedy – both national figures
whose stature has served the district well. Jesse has the persona to continue that
presence.

Finally, she is a woman. I think more women are needed in Congress. I’m reminded of
Senator Klobuchar’s debate comment, “If you think a woman can’t beat Donald Trump,
Nancy Pelosi does it every day!” Jesse Mermell has that sense of the moment. We
should give her the opportunity to be that kind of voice for the 4th District in Washington.

**This article was written by a group or person in the Hopkinton Community and does not reflect the views of HCAM or any of their Board Members or Employees.**