Karen Spilka to Receive Legislator of the Year Award 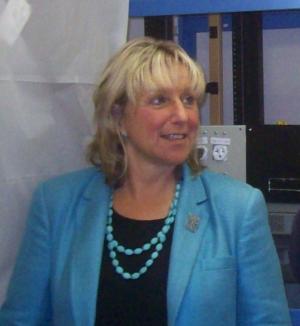 NAIOP Massachusetts, the Commercial Real Estate Development Association, will present a special Legislator of the Year Award to Senator Karen Spilka at its Annual Meeting on December 15. The Award will be presented in recognition of Senator Spilka's efforts to advance economic development in the Commonwealth.

"I am very honored to be receiving this award," stated Senator Spilka (D-Ashland), the Senate Chair of the Joint Committee on Economic Development and Emerging Technologies. "The goal of the economic development reform bill that passed last session was to provide tools to businesses so that they can start hiring again. NAIOP's feedback was extremely helpful as we developed the provisions of the bill, and I look forward to working with them on issues of importance in the future."

"Senator Spilka is a longtime advocate for economic development initiatives," said David Begelfer, CEO of NAIOP. "Her leadership on the comprehensive economic development bill, which included the critically important Permit Extension Act and was signed into law last summer, is just one example of her commitment to making the Commonwealth a better place to live and do business. NAIOP is proud to honor her with this special award."

NAIOP's Annual Meeting will also recognize H. Hamilton Hackney, III, of Greenberg Traurig, who will receive NAIOP's prestigious President's Award in recognition of his years of dedication and leadership on countless public affairs issues. Brian Levey and Marc Goldstein, both of Beveridge & Diamond, P.C., will receive the Chapter's Public Affairs Award in recognition of their work on the Permit Extension Act, which has allowed countless development projects throughout Massachusetts to move forward.

Following the business portion of the meeting, NAIOP Chairman Kevin McCall of Paradigm Properties will take the stage for an informal one-on-one conversation with developer and investor Alan Leventhal, Founding Chairman & CEO of Beacon Capital Partners, for an insightful look at 2010 and what's to come in 2011.

The 2010 Annual Meeting will be held at the Seaport Hotel on Wednesday, December 15, with Registration and Continental Breakfast beginning at 7:15 a.m., the Business Meeting from 8-8:30 a.m., and the Keynote Conversation beginning at 8:30 a.m. Tickets are still available, visit www.naiopma.org/annualmeeting or call 781-453-6900 x4. Tickets are $55 for NAIOP members and employees of NAIOP Corporate Firms, $85 for non-members.