Meet Your Neighbor - An interview with Sterling Hager 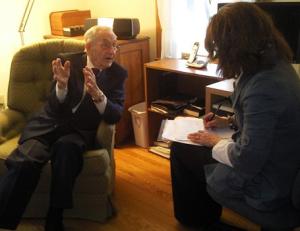 This is a reposting of Sterling's interview from May 2010

Sterling Hager was interviewed in 2009 for an HCAM TV film project on The Great Depression. Since his responses emphasized the importance of people helping each other during that period of history and his life observations offered wisdom and hope for the future generation, he was selected for sharing more about his life as interviewee for "Meet Your Neighbor". However, it was a shock to discover he is 98 years old, as he seems to be more of a man in early 80s. Sterling's response, " I tell everyone 1911 was a good year!"

I was wondering if you could start off by telling us what a typical day is like in your life?
I get up about 7:00 am I make my own breakfast and I come back and do a little housekeeping in the room . I exercise 20-25 minutes a day. I lift with dumbbells and ride a bike for about 15 minutes And if there are any bills to be paid I make a check or two. By then its 11:00 and I listen to some music. I especially like ragtime. Then its dinnertime and I like to take a nap afterwards. After that I listen to audiobooks and at 4:00 I get ready for supper. I have company every night for supper almost and after supper we look at movies from the library and that's my day! And then I do fight going to bed a little bit. I putter around and I know I should go to bed earlier but I don't always.

Do you have any hobbies?
I do a crossword puzzle everyday...it's my test...when the day comes that I can't do the crossword puzzle, I know I've lost my marbles. I also go over the Senior Center a couple days a week for armchair volleyball, senior scrabble and lunches there.

When did you move to Hopkinton?
I moved here in 1940. It was a very friendly place and we liked it very much right from the beginning. And so practically all of my children were brought up here and my daughter Betty...you couldn't get her out of here with dynamite...

So you probably have seen some changes in the town over the years?
Yes I should say so. Well you could always park downtown when you needed to and now try to find a parking space downtown! Hopkinton has almost become like a city compared to what it was. It's still small enough that a lot of people feel like they are a bit in the country when they come to Hopkinton. And the schools have been good for the most part. One of the changes has been that all the farms are disappearing now. All the successful men came from the farm back then. We are suffering now from not having enough good leaders, but I must say Hopkinton leaders are above average...in balancing the budget and dealing with town matters.

May I ask you to go back before your days in Hopkinton. Where did you live when you were a child?
I was born in Boxboro by "accident." My parents were living in Fitchburg visiting my grandparents in Boxboro but the roads were so rough that I was born there by accident. ...the day after Christmas. Then when I was about 5 years old I went to live with my grandparents in Somerville because my parents marriage had fallen apart Some people say "Oh you poor boy" for living with different relatives when growing up but I believe I lived a better life than some kids who were living with their parents! ...I think I had a GREAT life...and ..I think that grandmothers bring up the best kids.

And you are a grandfather now...and what do you think YOU are contributing as a grandparent?
(laughs) I don't know ...nothing special. There is ONE thing that my wife and I did... we had several grandchildren that we helped. One who was in debt who got on the right track and didn't get into debt again ever. We had another granddaughter living a not too good life. we helped her change her life and she ended up supporting herself and going back to college. And we have an adopted great granddaughter we gave a home to so she could go to Framingham College and she will graduate from college in 5 weeks.

So it sounds like in a sense as being grandparents you and your wife have provided the same love and guidance to these grandchildren that you said was important for you...How did you and your wife meet?
There was a girl across the dance hall who kept looking at me with a bright red sweater on and that was how I met my wife. But she was only 13 years old at the time and I was 18. I guess you could say it was love at first sight...When we went together we had to have a chaperone for 5 years.. and that was kind of a drag. So when she graduated we had enough of that and so we got married when she finished high school.

Well that certainly was a long waiting time.
Oh yes...they don't do that anymore. We had a wonderful marriage because we never looked at anyone else. I see all the divorces and of course it's tragic but our marriage was a success because we stayed in love all of our life.

What was your wedding like?
Our wedding was very simple church wedding. We didn't have much money so she had a friend who played the organ and her family made a lot of sandwiches and her sisters picked a lot of flowers because we got married in June. We didn't have photographers or caterers...we didn't seem to need it...nobody missed it.

I also remember hearing during the Depression you had to stop going to college and you went into egg farming and delivery?
Well yes, we lived on $12 a week which I earned from our egg route.

You did what you had to do and then you kept going onward in work?
Oh yes we never got anything we couldn't afford. If we didn't have the money we just did without. The first year we had a little money in the bank...strangely enough! I became a paint sprayer and a wood finisher for 5 years. Then I went to Telechron and I became an apprentice methods engineer. They gave us training and from there I became head of the time study department for Telechron in the branch plants and went to other companies and did methods engineering for the rest of my life.

And when did you retire?
When I was 65. I never had time off from when I first started to work. Boy I'll tell you ...the day I retired was probably the high point of my life!

And during those years of work...you and your wife raised a family...how many children do you have?
We had five children. We have a daughter in Maine and I have another daughter in North Carolina and of course Betty is living here in Hopkinton. And we have two boys, one in Concord New Hampshire and one is living with me right now temporarily. And grandchildren...(laughs) Its 18 or so...I've lost count...and great grandchildren as well...I can't tell you how many off hand but they are all quite prolific. (laughs)

You were married for 71 years and then your wife passed away four years ago and you have seen a lot of your contemporaries pass away in later life. I understand however that you have friends at the Senior Center and you also have been doing some dating in the last few years?
People of all ages need to be needed and appreciated. There was a time a few years ago when I met a woman from the Senior Center and we started to get together. She was 91 years old. She had a bad heart...we knew she had a short life left but we had 9 months of a gorgeous romance..

I know you have lived a lot ...seen a lot of history in your 98 years. Do you have any highlights of events that happened in history over time that made an impact on your own life?
Well there have been many wonderful things that have happened ... Lindberg's flight over to Europe was a high point in my life. I look back at how the world has changed ...some of the things invented in my lifetime are fabulous.

Who was your favorite President?
Harry Truman turned out to be a very good president . He wasn't afraid to speak his mind or to act on matters....maybe that was his secret to success...or maybe it was his wife. She was great because she told Harry what to do sometimes. Harry believed "behind every good man was a good woman." A great deal of the top executives are women now...sometimes women have been harder workers than men. I like the President we have now as he is willing to participate and talk and compromise.

What is your wish for the next generation?
I hope there is an end of the wars. To not always go to war because war doesn't really settle anything. Its a terrible thing. It would be nice if the world could be more peaceful but I don't know. The other problem is if we can control pollution. I would hope that we can control the air and water and our water problems because pollution is going to be a big problem. And so my wife and I always said we lived in the best of years before pollution was a problem. ...before drugs...they were not a problem...and people were respectful. Now we seem to be losing respect a little bit for each other and I would hope that would come back...maybe it will.

To watch the HCAM program of this interview, click here.