Hopkinton Center for the Arts Gets Funding Support

The Hopkinton Community Endowment (HCE), an organization founded to improve the quality of life in Hopkinton through funding projects, has announced its support for the Hopkinton Center for the Arts. According to their recent press release, the Endowment is initiating a capital campaign to develop the facility which will be located at the current site of the Cultural Arts Alliance and Enter Stage Left (ESL) Theater.

The idea for an arts center started several years ago with the Cultural Arts Alliance (CAA). In May of 2004, Town Meeting voted to allocate $100,000 towards the initial phase of renovations at the site and funds were raised to “raise the barn” and stabilize its foundation.
Since then, Sandra Livis, Co-Executive Director of the CAA, has worked to continue to improve the property and approximately $80,000 in additional renovations have been made.

“When ESL moved in back in February,” said ESL Executive Director Kelly Grill, “it was the intent to ramp up the efforts to finish the barn and build a theater behind it.”

Last year, the Hopkinton Community Endowment set a goal of raising $1 million before Hopkinton celebrates its 300th birthday in 2015 and sought advice from legal counsel and previous donors about how best to achieve that goal. The answer was loud and clear; engage in a capital campaign for a specific project with a defined scope, budget and timeframe.

“We brought this to our focus groups,” said Chuck Joseph, HCE Chairman, “and I could not be happier at the enthusiasm in the community for supporting this cultural arts center. We hit the right project.”

There are several phases to the project. Phase I of the proposed center involves completing renovations to the barn and turning it into both an educational and performance structure. The first floor is planned to be an open space that will serve several uses, while the second and third floors will accommodate classrooms and rehearsal space.

Future phases include a 300-seat theater, renovations to the farmhouse and a new HCAM facility.

“HCAM is a self-funding entity,” said Joseph. “The opportunity to be on that site, between the Center for the Arts, the schools and HCAM, is just too good to pass up. It will not cost HCAM more than its current lease.”

Funding for Phase I and other future phases will come from both public and private resources. Renovations to the barn are estimated at approximately $500,000 to $600,000 and the Endowment is currently seeking $250,000 from the town’s Community Preservation Committee (CPC) which will then be matched by private donations. A funding proposal has been submitted to the CPC and the Endowment goes back before the committee on December 15th. If the project is recommended by the CPC, funding must then be approved by Town Meeting in May.

“It would be a beautiful, private, public cooperative event and we could start next year,” said Joseph.

According to Joseph, the barn could be completed 18 months after construction begins. The timelines for completion of the other phases are longer and will depend on funding. The Endowment will kick-off its fundraising efforts for the Hopkinton Center for the Arts on January 22, with the 2nd Party in the Kitchen, to be held at Clarke’s Luxury Showroom on Fortune Boulevard in Milford, MA. Tickets can be purchased on-line at http://hce.eventbrite.com/

“All of these people in the community, coming together to make this happen, could be very exciting,” said Joseph.

See below for the HCAM News interview with Hopkinton Community Endowment Chairman Chuck Joseph as he provides an update on this latest development in the next chapter of the Hopkinton Center for the Arts. 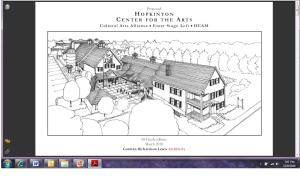