Residents Speak Out Against Cost Cutting Proposals in School Budget

Rising class sizes, especially at Hopkins School, proposed increases in fees, and a charge for dropping children at daycare, were among the issues discussed by parents during the public hearing for the FY2013 school budget held last night in the Middle School Library, which despite the rainy weather drew a large crowd.

Faced with increased fixed costs and a reduction in circuit breaker and federal dollars next year, Superintendent Landman has proposed several cost cutting measures for his recommended budget, which still represents a 3.95 percent increase over fiscal year 2012. Several residents spoke at last night’s meeting to voice their concerns about the cost cutting proposals.

Several residents raised concerns about class size, another said her daycare provider would simply pass the fee for dropoff to parents, others were concerned about the lack of a full time assistant in classes at Center School. One parent also questioned the proposed spending for technology and asked for an explanation of what he saw as a bolstering technology in place of instruction.

Educate Hopkinton member Esther Driscoll said she hoped there would be some support for the Superintendent's budget.

"I think it's time we started investing in our schools again," said Driscoll. "They are the life line of our community, they are what keep our property values high. We have cut so far, that we're not at bone, we're at marrow."

One hundred and twenty eight residents have actually signed and presented a petition to the School Committee regarding class sizes at Hopkins School. Originated by Laura Barry, who did not make the beginning of the meeting, the petition was read aloud by Educate Hopkinton member Amy Ritterbusch.

“Specifically we are concerned about the students at Hopkins," read Ritterbusch, "all of whom are projected to have class sizes of 24 or 25.”

Other parents who had not signed the petition said they supported it, including Liz Layton who said she represented number 129.

In response to the increase in class sizes, Superintendent Landman provided some history, and while he acknowledged that class sizes at the elementary level were going up, he said that some increases as students get older is to be expected.

By the end of the public hearing, a total of 13 residents had voiced their concerns, and before continuing with their working session, Superintendent Landman thanked those who participated.

No vote was taken at last night’s meeting,but the School Committee is holding another working session in the Middle School Library on Saturday, January 28th beginning at 9:30am. Town Manager Norman Khumalo says he is due to present his budget, which will include the final recommended Superintendent’s budget, to the Board of Selectmen at the end of February. 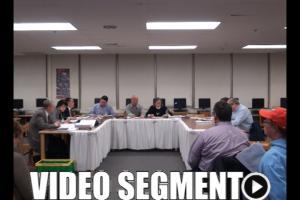