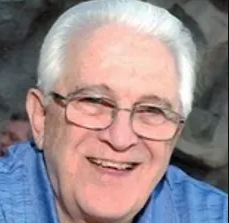 Louis E. Merloni, 84, a lifelong resident of Framingham passed away Mon. Jan. 23rd from complications due to Alzheimer’s Disease.

He was the son of the late Louis and Catherine (Datti) Merloni and the husband of Sandra (Langley) Merloni.

Lou worked several jobs in his lifetime; an appliance repairman for Westinghouse, manager of a family-owned package store, manager of the Christopher Columbus Club, and after retirement, working as a school bus driver for the Town of Framingham. He was active in the Framingham community serving as a coach for Framingham Legion Baseball and Framingham Little League. Lou served his country honorably with the Army from 1961-63.

Big Lou could always be found at the Columbus Club playing cards or bocce, on a golf course, or at a sporting event cheering on his grandchildren. His larger-than-life personality and infectious laugh will truly be missed by all who knew him.

A funeral Mass will be celebrated Monday, Jan. 30th at 10:00 am in St. Tarcisius Church, 562 Waverly St. Framingham, MA with urn burial to follow in St. Tarcisius Cemetery. Calling hours will be Sunday from 12:00-3:00 PM in the Matarese Funeral Home, 325 Main St. Ashland, MA. In lieu of flowers, donations may be made to the Alzheimer's Association, 309 Waverley Oaks Rd, Waltham, MA 02452 – In Memory of Louis Merloni.