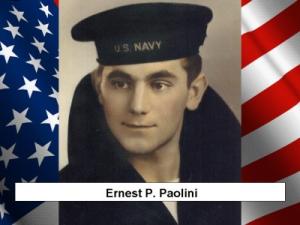 Ernest "Ernie" P. Paolini died on 9 February 2014, 5 days after the 92nd anniversary of his birth. He was a proud member of the US Navy having served during World War II. As a 20-year old he enlisted in 1942, becoming a machinist mate. Ernie's USN training and early assignments were at the Great Lakes Naval Training Center, advanced machinist training in St. Paul, Minnesota, and the Philadelphia Naval Shipyards. He always remembered his barracks number, 1609, at Great Lakes.

Ernie was assigned to a brand-new fleet oiler, the USS Ashtabula (AO-15), otherwise known as the "Mighty A." The ship was "laid down" in October 1942, at Sparrows Point, Maryland, and launched in May 1943, prior to commissioning on 7 August 1943.

After outfitting at Norfolk, Virginia, and shakedown in the Chesapeake Bay, the Ashtabula sailed to Aruba for fuel loading, and through the Panama Canal to the Pacific. "Seeing the World" as a sailor, Ernie visited Pago Pago, Tongatabu, Nuku 'Alfoa, Espirito Santo, and Tutuila (Samoa) before returning to San Pedro, California in December 1943.

Ernie was overly modest about his military service, always deferring to his Hopkinton comrades who participated in "big name" battles. He, however, as a 21-year-old was involved with several near-death experiences. After returning to the Pacific, the Ashtabula was anchored off Roi-Namur Island (Kwajalein atoll) for operations supporting the occupation of the Marshall Islands. For the first time Ernie saw, smelled, and trembled for two days from a Japanese bomb attack on an ammo dump. Fire and smoke were evident the next day. The action earned the Ashtabula its first operational star.

The next critical assignment was to support the first American forces to fight for the liberation of the Philippines -- MacArthur's return. In Leyte Gulf, and in the largest (and last) Naval battle ever, on 24 October 1944, three Japanese torpedo planes attacked the Ashtabula. One torpedo hit the port side at 1848 hours. The oiler came away with a 16-degree list to port; repairs were made at San Pedro. Ernie was not harmed.

In 1945, the Ashtabula's base was shifted for the rest of the War from Long Beach, California to Ulithi, Caroline Islands. On 11 March 1945, off Ulithi, a Yokosuka P1Y1 kamikaze hit the USS Randolph (CV-15) carrier just below the flight deck, killing 27 men, and wounding 105 during Operation Tan No. 2. From his position on the Ashtabula, Ernie could see the effects that lit-up the sky overhead.

In the vicinity of Ulithi on 5 April 1945, the USS Ashtabula and the USS Thornton (AVD-11) collided at sea. This was another close call for Ernie.

After the invasion of Okinawa, Ashtabula was in Admiral W. F. "Bull" Halsey's 3rd Fleet until the Japanese capitulated. The ship earned 8 battle stars for WW II service.

Ernie was forever proud of his 2 years and 8 days in wartime service, when a million barrels of fuel oil were delivered, along with 50 thousand barrels of diesel oil, and 2 million gallons of aviation fuel.

Discharge was in March 1946, after which Ernie married and relocated to Hopkinton for 68 years. He raised a family and stayed active in veterans activities including frequent Vets Breakfasts, and sharing his experiences in Veterans Remember and the Vets Photo Gallery.