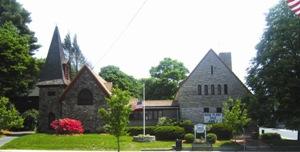 On day 1 of the Annual Town Meeting, the last topic of the night was Article 15: Library Construction. Numerous people expressed their opinions on the project for just over an hour until a verdict was finally reached.

The Appropriation Committee as well as the Capital Improvement Committee both recommended approval for the library project which would expand the current 5,700 square foot library to 22,000 square feet. The total projected cost of the project is $11,750,000 which $4,500,000 will be funded by a State Grant, $1,000,000 by private fundraising leaving the total town cost at $6,250,000.

Laura Barry of the Library Foundation, Dan McIntyre, Chair of the Permanent Building Committee and Selectmen Vice Chair Ben Palleiko, presented the proposed plan and fielded questions and concerns for the library project. The new library will be a 22,000 square foot facility where the current library exists and feature 21 parking spaces rather than the current 6. Some of the benefits presented were the new library would "Serve as the intellectual and social hub of the community, engage many residents who currently use other libraries and enhance the economic vitality of the downtown area."

Some concerns about the project included; the fear that the structure would be too big for the downtown area, the tradition and historical background of the current library would be taken away and that the new library would impede on surrounding properties. An amendment was presented to reduce the capacity of the project and forgo the state grant of $4,500,000, reducing the project amount to $7,253,517. The proponents of the library made it clear that the expansion project was too far a long in the process to be reduced and the downsized amount proposed would essentially destroy the project.

After the proposed amendment to reduce the scale of the project, much more debate, discussion and views of the project were discussed, a move to vote for the reduced amount was called. The reduced amount did not pass by an overwhelming majority returning the amendment to the original proposal. Another move to vote was called shortly after and despite a number of views expressed against the project, the original Article 15: Library Construction plan passed the two thirds majority callout vote. According to the proposed plan, the new library expects to open in December 2016.

For more information on the Library Expansion Project: www.hopkintonlibrary.org/hopkinton/expansionhome.asp.

For more information on results of Annual Town Meeting: www.hcam.tv/news/annual-town-meeting-2014-results

Tune into Town Meeting tonight at 7:00 pm live online and on HCAM-TV.