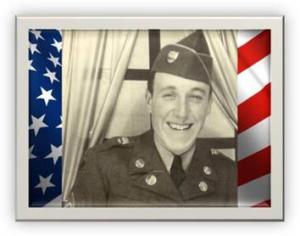 A Veteran, he served as a US Army Staff Sergeant in Germany during the early 1950s. At the onset of the Korean War, Ernie was a member of the Vermont National Guard, known as “The Green Mountain Boys.” In early September 1950, Ernie’s group became a part of the 43rd National Guard Infantry Division, and was called to active duty. They replaced a Regular Army unit in Germany, allowing that unit to be deployed to Korea. The main mission in Germany was to help bolster NATO against the ever-present threat of Soviet invasion. Ernie’s Guard unit became involved in the denazification (Entnazifizierung) of Germany. This was done as an Army of occupation.

Later in his tour Ernie was reassigned to troop entertainment. This activity created an opportunity for learning how to direct stage performances. A friend tells of a play directed by Ernie, and was performed in a bunker once used by Hitler. After his military service and through his career as a teacher, Ernie directed more than 130 plays, mostly at the high school level.

Formerly of Westborough and Natick before moving to Hopkinton, Ernest became an active member of Saint John the Evangelist Church. A 1948 graduate of Brattleboro High School, he went on to earn, in 1950, an Associate’s degree from Burdett College in Boston. After his military service he earned an AB degree from Boston University (1956), an MEd degree from Boston State Teacher’s College (1960), and an MA from Boston College Graduate School of Arts and Sciences (1963).

Ernie spent many years as an English teacher in several towns including Martha’s Vineyard, Southborough, Northborough, and Newton.

Friends gathered at the Chesmore Funeral Home, and at a Mass of Christian Burial in Saint John the Evangelist Church. Burial followed in Evergreen Cemetery in Hopkinton.