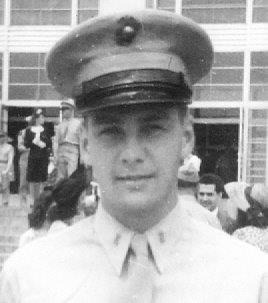 Paul enlisted in the US Marine Corps in March 1942 while a student at The College of the Holy Cross, and shortly after the attack on Pearl Harbor. Graduation schedules were accelerated, and Paul reported to Parris Island, SC on 30 December 1942.

Success during basic training earned Paul an opportunity to attend officers training at Quantico, VA in April 1943. He received his commission as a 2nd Lieutenant on 30 June 1943 and was married the same day.

Paul described his next duty station as a "cushy" job as the morale officer in charge of entertainment and athletics. His duties included being a coach of a baseball team at Pearl Harbor that played 85 games with, and against, major league professionals. This experience was re-lived after the war.

Early in 1945, he was among thousands who sailed to Iwo Jima where Paul was with the 5th Amphibious Corps. He was assigned to a Company HQ receiving station to process critically needed replacement troops. Replacements typically had not experienced the landings, and were unaware of the night-time risks of giving away one's position to the stealthy Japanese soldiers, but after a few days of battle experience they developed an appreciation for cover and concealment. Movement among not-so-savvy replacements during the night was a serious matter of constantly reminding them of the importance of knowing passwords and trusting that sentries were alert and knowledgeable too.

His company HQ unit was also a listening post for gathering field intelligence for transmitting to the battalion and others in the chain of command, ultimately to Major General Harry Schmidt, the Corps Commanding General (CG) located offshore on the flagship USS Auburn (AGC-10).

The installation comprised 6 or 8 foxholes which were 8 to 10 feet in diameter, fortified with sandbags, with 10 to 15 feet between the holes. The command post (foxhole) contained radio gear. Staffing included a captain, two lieutenants, and up to 30 marines in the surrounding foxholes to protect the functioning of the Captain's foxhole. Within a mile there was another 10-foot hole with a similar configuration around it for another company-level unit. Infiltration by Japanese soldiers was an important concern.

As the battle situation changed, the foxholes re-situated further inland to be closer to the action. During the first night or two, Paul was about 150 feet from shore. Later, operations moved 2 or 300 feet inland, then 4 or 500 feet, and so on.

When General Schmidt came ashore on D+5, the 5th Amphibious Corps Command Post was located inland, on rocky terrain probably with 50 defensive foxholes. By that time the Corps already suffered more than 6.8 thousand casualties including Majors and Lt. Colonels.

Rarely did Paul speak publicly about what specifically happened on Iwo Jima; yet, those memories stayed with him. Undoubtedly there is much we will never know.

Within the first week a Holy Cross football star, Jim Scondras, was KIA. At the Battalion HQ tent there was a night-time invasion of Japanese who came out of underground "holes." Guards returned fire to drive them away. Japanese General Tadamichi Kuribayashi named the small teams of infiltrators "Prowling Wolves."

After the capture of Mt. Suribachi, a marine went looking for souvenirs and crawled into a cave which opened to the outside face of the mountain. He was shot dead. Paul and others formed a human chain head-to-toe and crawled into the cave about two-thirds of the way up the mountain to rescue the body.

There were many mines in the proximity of Suribachi, including anti-personnel mines called "castrating mines." One Marine was fatally wounded as he and Paul were walking toward Suribachi; Paul was 3 or 4 feet away.

The battle of Iwo Jima generated 27 Congressional Medals of Honor -- more than any other battle. One award was to Sgt. Joseph R. "Rudy" Julian who was from Sturbridge, Mass. Rudy was a platoon sergeant in Paul Phipps' unit on Hawaii before embarking to Iwo Jima. Sgt. Julian was someone who Paul never forgot.

When Iwo Jima was secure, troops returned to Hawaii to train for a massive assault on the Japanese homeland. The atomic bombs, of course, eliminated the need for that plan. Instead, from Maui Paul went to Japan and participated in the occupation.

In the fall of 1945, Paul returned to the USA. In April 1946, he went to Camp Lejeune, NC, where he was remembered for his experience coaching a Marine baseball team on Hawaii in 1944. Paul was named coach at Montford Point that was a segregated -- all black -- portion of Camp Lejeune.

Personnel were gradually discharged from the service, including the baseball team's catcher. The players asked Paul to be a member of the on-field team. Paul became a player-coach of an all-black baseball team a year before Jackie Robinson broke the color barrier in the major leagues in 1947. This is a frequently told story which pays tribute to Paul's nature to get along with everyone and hold no bias.

Returning to Hopkinton in January 1947, Paul became deeply involved in a wide range of veterans activities. He was a member of the American Legion; he can be seen in Hopkinton's Veterans Photo Gallery; and, is on an HCAM-TV video of Veterans Remember.