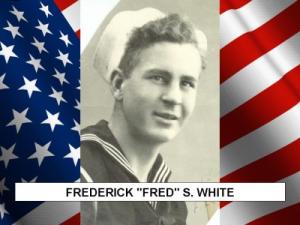 Frederick S. White, 84, died Friday, 26 March 2010. “Fred” was a proud and patriotic sailor who served in World War II including time in North Africa. He was from a family of five siblings who all served in WW II. As an under-age 16-year old, Fred was denied enlistment. Soon after turning 17, he dropped-out of high school to enlist in the US Navy. His first post was the Newport Naval Training Station.

Upon completion of basic training, Fred was assigned to the Naval Training School at Fishers Island for top secret training in the, then, new sonar technology. His specialty was Harbor Entry Control. A staging area for North Africa was on Long Island, NY where Fred embarked on the USAT Brazil, and for two weeks before Christmas in 1942, sailed to Casablanca, Morocco. He was a gunner’s mate at the time.

Fred’s arrival was a month after the historic “Operation Torch” which involved General Dwight D. Eisenhower as the supreme commander and Major General George S. Patton in charge of the invasions to the west in Morocco. Patton had direct command of Major General Jimmy Doolittle for aerial support. Major General Mark Clark took part in high-level negotiations which helped convince the Vichy government to cease resistance and join the Allies. Morocco was a French protectorate ruled by the French Vichy army.

As the African campaign moved pincer-like east and west, Fred was re-assigned throughout the theater: Fedala, north of Casablanca, Mers-el-Kabir, near Oran, and Palermo, following the successful invasion of Sicily. In all these locations harbor entry control was critical to keep sea lanes open. Fred remembered when the USS Massachusetts (BB-59) called “Big Mamie” destroyed a German U-boat.

When the military campaign transitioned to Europe, Fred left Casablanca in early 1944, and reported to Norfolk, VA. For a short while he was at Fort Burnside (Beavertail Lighthouse) in Rhode Island which was the harbor entry control point for Naragansett Bay. Then, Fred for 7 months was at Fleet Sonar School in Key West, FL where he studied sonar techniques and equipment, and anti-submarine warfare.

One of Fred’s proudest moments was his acceptance to the V-12 Navy College Training Program which was designed to supplement the force of commissioned Navy officers during WW II. Fred was scheduled to attend the University of Maryland. Unfortunately before he took his first class, new students were no longer accepted in anticipation of funding being eliminated in mid-1946.

As a senior petty officer Fred moved to Bainbridge, MD to train recruits in gunners mate school. Other training duty included on the USS PCE 867, an Allied escort ship of WW II, and helping to design gun placements before the commissioning of the USS Papago (ATF-160). After shakedown, the Papago relocated from Charleston, SC to Newport in November 1945.

In January 1946, Fred was discharged from the Navy at Fargo Barracks in South Boston. He quickly earned his GED, and through the GI Bill was awarded a Bachelors degree from Fitchburg State College and a Masters degree from Framingham State College. His many training assignments while on active duty were instrumental in his choosing a career in education, which for 14 years was teaching in the Satellite Carpentry Program for potential high school drop-outs, and as a counselor in the Guidance Department of Keefe Tech in Framingham for 4 years. Local activities included American Legion and VFW memberships, and participation in a wide range of veterans’ affairs.