"Honoring the Spirit" from Hopkinton, MA to Quantico, VA 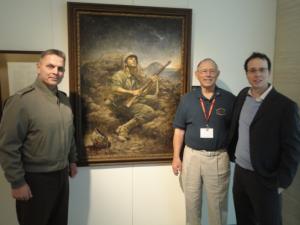 The “ Honoring the Spirit” painting and related material is on exhibit in the Leatherneck Gallery at the Marine Corps Museum in Quantico, Virginia. The painting was scheduled to be on display for the month of February 2011. After viewing the painting, Museum officials expressed interest in extending the stay.
In addition to the painting, the exhibit, deeply rooted in Hopkinton, included photos of the seven Hopkinton veterans who saw action on Iwo Jima: Harold Bowman, John Cahill, Richard Walker Clafin, William “Bill” Connor, Joseph “Bud” Kinnarny, Bob Lavoie, and Paul Phipps. A Letter From a Mother to Her Son, received by Bud Kinnarny on Iwo Jima, 1945 was also included in the display.

It is clear that the “Hopkinton Story” and painting taps into an event that has transended time. Iwo Jima and the men who fought there do, in fact, represent a spirit that exemplifies … courage, perseverance, and liberty.

The National Museum of the Marine Corps hosted two lectures on Saturday, February 19, 2011, the 66th Anniversary of the start of the Battle of Iwo Jima. The first lecture was delivered by Neil Abelsma, Curator and the second by Dustin Necce. Curator Abelsma focused the iconic Iwo Jima Flag and its journey around the United States as part of a campaign to raise WW II War Bonds. The Iwo Jima Flag made two stops in Massachusetts in Boston and Worcester.

Hopkinton holds all its veterans in high reguard and is especially thankful for the service of Harold
Bowman, John Cahill, Richard Walker Clafin, William “Bill” Connor, Joseph “Bud” Kinnarny, Bob Lavoie, and Paul Phipps. They served their country and their community on Iwo Jima.

THE ARTIST
Dustin Neece is a classically trained figurative painter. Born and raised in Hopkinton, Massachusetts. He is a 2002 graduate of Hopkinton High School. After studying with Hopkinton based impressionist
painter Jaime Alfonso and traveling to London to study with the renowned figurative painter Israel Zohar, Dustin completed his painting “The Bowler (Self Portrait).” This piece won him nation-wide recognition in the Scholastic Art Awards in 2002. “The Bowler” received the highest honor for oil painting in the national competition and was hung in the Corcoran Gallery of Art in Washington DC.

Dustin went on to study the arts at the prestigious Rhode Island School of Design (RISD). During this time, international art collectors in Manhattan and Jerusalem discovered his unique talent. Upon completing his university studies, Mr. Neece was an assistant of Odd Nerdrum, who is quoted by Andrew Wyeth to be “the greatest living painter.” At Nerdrum’s homes in Norway and Iceland, Dustin refined his craft with a living master. At the age of 26, Dustin has already been recognized internationally and has achieved more artistically than most of his peers. Most artists take a lifetime to be recognized for their talents.

COMMUNITY SUPPORT
Many in Hopkinton supported the “Honoring the Spirit” initiative especially:
• Hank Allesio,a veteran himself, was inspired to collect photos of Hopkinton veterans, which lead to the discovery that Hopkinton had a unique tie to Iwo Jima. The collection is viewable at www.HCAM.TV .
• Doug Kulig, a Marine veteran helped to advance the idea of the painting as a vehicle to recognize the contributions of Hopkinton’s veterans by highlighting the community’s ties to the historic Battle of Iwo Jima.
• Mike Neece, who embraced the idea of the painting as a vehicle for recognizing all Hopkinton veterans and provided encouragement and backing.
• Lin Ezell, Director of the National Museum of the Marine Corps who made display of the painting and exhibit possible.

DONORS
While the idea for the painting came from the heart, it took financial resources to complete, which were provided by: