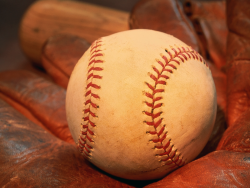 Heroes can emerge from most anywhere. Two specific segments of American life have generated many popular heroes: professional baseball and the military. Think of the names that spring forth: Babe Ruth and Satchel Paige were nonpareil baseball players, George Patton and Audie Murphy were soldiers never to be forgotten. Moreover, there are certain heroes who are recognized in both baseball and the military.

Our country was birthed from the effects of a war -- the War of Independence from England. In addition there is an historical record of baseball (base ball) being played in America as early as 1791. It was inevitable the military and baseball would intersect.

Baseball and military heroes were remarkably linked during the aftermath of the American Civil War. One unofficial, though credible, source tells of 30 men who fought in Civil War battles and who were (later) involved with major league (ML) baseball. They include the first president of the National League, and Dickson "Dick" McBride a pitcher for the Philadelphia Athletics who played 15 ML seasons -- longer than other Civil War veterans.

Continuing the trend of merging those who played professional baseball with those who served in the military was Erasmus Arlington "Arlie" Pond, and John Thomas Grimes. In 1897 Mr. Pond had his best season as a pitcher for the Baltimore Orioles. In 1898 he served as a medical officer in the Philippines during the Spanish-American War. Mr. Grimes had a one-week career with the 1897 St. Louis Browns where he set the ML record of six hit batters in one game. He served 30 years in the US Army both in the Spanish-American War and World War I.

World War I affected ML ballplayers such as Ty Cobb and Christy Mathewson. Congress declared war 6 April 1917, and a substantial troop build-up resulted in millions of men wearing a military uniform. The USA entered the war later than our allies, and the Armistice of 11 November 1918, placed a relatively quick end to our participation.

Numerous major league baseball players performed heroically for America in all branches of the military. For example, in 1940 Hank Greenberg registered for the draft, and was the first MLB Hall of Fame member to enter the service in the WWII era. Greenberg was discharged on 5 December 1941, when he reached the age limit of 28 years. Shortly thereafter, 1 February 1942, he re-enlisted. He was in the US Army Air Corps, went to the China-Burma theater, and became a Captain. Bob Feller, also in the Hall of Fame, was the first to enlist after the bombing of Pearl Harbor. Feller was driving to the offices of the Cleveland Indians to sign his contract for the 1942 baseball season when he heard about Pearl Harbor on the radio. The next day, 8 December 1941, he enlisted in the US Navy and volunteered for combat service. He was a Gunnery Chief of a 23-man crew on the USS Alabama that saw action at Iwo Jima. Feller earned 5 campaign ribbons and 8 battle stars, and became a CPO (Chief Petty Officer).

Two classic heroes with movie-star qualities were Ted Williams of the Red Sox and Jerry Coleman of the Yankees, Marine pilots in both WWII and the Korean conflict, and who both earned dozens of medals for valor. Their separate military experiences had an unusual similarity. In Korea Williams flew a Grumman F9F Panther fighter jet, and among his 39 combat missions was often the wingman for (astronaut) John Glenn. Once Williams' Panther was on fire and he had to belly-land the plane. He slid about 1500 feet up the runway before being able to jump out and run off the wing tip. During his time in Korea, Coleman had a comparable brush with fate. While flying a Corsair, he crash-landed with a full bomb load. The plane flipped over, and he was nearly strangled by his helmet straps. Both flying Marines returned to MLB and enjoyed several productive years.

Decorated fighter pilots are not the only type of baseball hero that emerged from wartime America. A wide swath of bravery was shaped by a tradition of excellence from our playing fields. World War II, the largest of the major wars, absorbed 500 ML players including 35 Hall of Fame members according to the National Baseball Hall of Fame. Baseball fans can recall favorite players from among the many who served.

A small sampling of MLB'ers who were in the military includes: Al Rosen who navigated an assault boat in the initial landing on Okinawa; Earl Johnson, a Red Sox pitcher, was a sergeant during the Normandy invasion, earned a Bronze Star and a battlefield commission, then as a Lieutenant during the Battle of the Bulge earned a Silver Star; Art Johnson of Winchester, Mass. and a Boston Brave, was at Iwo Jima on the light aircraft carrier USS Langley (CVL-27); Bill Akers had retired from playing for the Tigers and Braves, and was the first former ML'er to join the USAAF, spending 31 months in the Pacific and earning the Presidential Citation with Oak Leaf Clusters and four battle stars.

Buddy Lewis played for the pre-war Washington Senators, enlisted in the USAAF, and amassed 1799 flying hours, 611 of which were in combat in the China-Burma theater; Gil Hodges as a Marine was with the 16th Anti-aircraft Battalion and experienced both Tinian and the initial landing on Okinawa where he earned a Bronze Star; and, Hugh "Losing Pitcher" Mulcahy from Brighton, Mass. was the first ML player inducted into to US Army under the new, peacetime selective service act, on 8 March 1941.

It is true many MLB players served in a capacity of boosting troop morale. Playing baseball on barnstorming teams allowed other service personnel to see ML stars, and to identify with a popular peacetime activity. This, however, was not the norm for all ballplayers. A long list of baseball stars experienced the heat of battle. Included were those who earned Purple Hearts: Hank Bauer was hit by shrapnel on Guam, wounded on Okinawa, and earned a Bronze Star in each campaign; from an LST participating in the Normandy invasion Yogi Berra was in charge of a 50-foot rocket-launcher boat that went within 20 yards of the beach; Lou Brissie's shin was shattered by shrapnel in northern Italy while earning a Bronze Star and two Purple Hearts; Ralph Houk was wounded while in Germany during the Battle of the Bulge, he received a Silver Star, and a Bronze Star with Oak Leaf Cluster; in Germany and the Battle of the Bulge Warren Spahn was wounded in the foot by shrapnel, and received a Bronze Star; and, Hoyt Wilhelm was in the Army infantry and wounded during the Battle of the Bulge.

In the mainstream press the Korean conflict is frequently called "The Forgotten War." Maybe to historians, but not forgotten by baseball fans who battled-through cheering for their teams that were deprived of key players during the 1950 - 1953 period. More than 100 MLB'ers served. While pilots Williams and Coleman were lighting up the skies, Battalion Surgeon Bobby Brown was with the 160th Field Artillery Battalion, 45th Division until July 1953. Frank Sullivan was a rifleman in ground combat fighting the enemy and earning the CIB (Combat Infantryman Badge). Frank, now a book author, wrote "The CIB, framed on my wall above this spot where I write, is dear to my heart because it is a symbol of my not being labeled a coward."

MLB'ers served during the Viet Nam War. There were, however, few star players that followed the call, and no Hall of Famers. Among those who served during the era as Reservists and members of the National Guard were Mark Belanger, Bill Campbell, Jerry Koosman, John Lowenstein, Bobby Murcer, and Fred Stanley. Several players experienced action.

In Viet Nam Al Bumbry was a platoon leader with the rank of Lieutenant where he earned the Bronze Star for heroism. He played mainly for the Orioles. Jim Bibby of the Rangers, Indians, and Pirates was a truck driver in Viet Nam, and experienced dangerous duty. Ed Figueroa served a tour as a Marine in Viet Nam where he saw the effects of war. He later became the Number 2 starter for championship Yankees teams from 1976 to 1978. Gary Maddox spent 1969 and 1970 in the Army. While in Viet Nam he was exposed to chemicals which damaged his skin. He played with the Giants and Phillies as a strong defensive outfielder. Carlos May lost part of his right thumb in 1969, at Camp Pendelton. He was able to play baseball the next year.

These heroes were legends both as MLB players and brave military men. America should be proud.

Baseball fans in New England are armed to the hilt with reasons why their favorite team -- Red Sox or Yankees -- is better. What about favorite ball-playing military heroes in an all-star team from the Red Sox or the Yankees? For starters here’s the first-round draft prospects:

Which team would you root for? Overall, hundreds of MLB'ers served. A team that might be most deserving of your cheers is the baseball-military all-stars from Hopkinton. Few know that local veterans, while serving our country in various branches of the military, also played organized baseball.

Hopkinton All-Stars are an impressive group; most have strong, local histories of athletic accomplishment. The roster is: