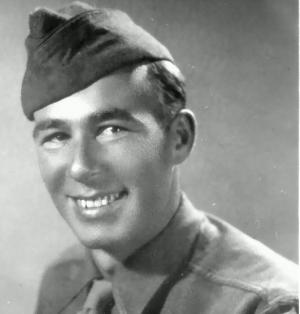 Raymond J. Fair, Jr., the oldest veteran in Hopkinton, passed away on 13 July 2012. Ray was 94 years old. He served proudly in the US Army during World War II.

When the USA entered WW II, Ray was granted deferments for his work in defense operations. At 26 when finally drafted, he processed through Fort Devens before training at Camp Gruber in Oklahoma. When his unit transferred to Louisiana, Ray became a member of the newly-formed (February 1943) 985th Field Artillery Battalion. He was assigned to Battery A.

On 21 August 1943, the 985th embarked from Camp Kilmer in New Jersey for the ETO, sailing on the Matson Lines' USAT Monterey with more soldiers -- 6,855 -- than she ever before carried. The destination was not known until the ship sailed through the straits of Gibralter, docking after 13 days at sea (2 September 1943) at Oran Harbor, North Africa, where they remained for two months waiting the arrival of 155 mm "Long Tom" guns. Long Toms fired a 100-pound projectile using a 15-man crew. While waiting, the men of the 985th guarded Italian POWs from the earlier North African campaign.

On 28 October 1943, the USS Charles Carrol (APA-28) from the port of Algier took the 985th to Bagnoli Harbor, Naples, Italy to begin several months of combat in the Italian campaign. 17 November 1943, was the first day of enemy action. It lasted until VE Day, 8 May 1945. The main mission was to support the USA 5th Army, commanded by LtGen Mark W. Clark. When the 5th moved to Anzio, the British 8th Army replaced them, and the 985th supported the 8th which was originally commanded by Gen Bernard Montgomery. During the more than 500 days of shelling the enemy, there was one stretch of 6-months when cannoneers fired every day.

Battery A helped win the Battle of Cassino. During May 1944, the Battery helped crack the Gustav Line with the greatest artillery barrage ever unleashed. It was the second phase of the Battle of Monte Cassino. Starting at 0800 hours 775 allied aircraft dropped 1250 tons of high-explosive bombs in a four-hour period. Immediately after 1230 hours, 195,969 artillery shells were fired from 748 guns in seven-and-a-half hours. Shelling was so intense, Long Tom gun barrels wore out.

Another high point in the Italian campaign was a 125-day stand along Highway 6, near Cassino. The enemy had constant observation of all batteries; nevertheless, the 985th responded with 45 thousand shells. Famously the one escape route available to the Germans was cratered by a 240 mm shell. This created a traffic jam which attracted the aim of every Long Tom in the 985th. In a few hours 1,680 rounds were fired on the enemy.

Communications were critical to successful artillery support. Gun placements, fire-direction crews, and control headquarters were connected by hard-wire tele-networks. These wire networks were continually damaged during shelling barrages. Each night Ray and teams of linemen were required to trace all the wires and replace and/or repair the communication system. The cover of darkness and errant shellings made this a treacherous job. Throughout Ray's life he remembered those night-time assignments.

A fond memory that Ray enjoyed retelling was an evening when he was on CQ (charge of quarters) duty. The well-known photo journalist Ms. Margaret Bourke-White showed-up at Battery A requesting an opportunity to photograph the firing of a Long Tom. Cannoneers were firing all day, and they were asleep. To be helpful Ray and four others loaded and fired a gun. The photo became a part of a LIFE magazine story published in February 1944. Ray kept a copy of that magazine all his life. To see the photo, Click Here and look at page 22.

Gun placements were frequently re-located as the Italian campaign migrated northerly. At the time of VE Day, Battery A was at Bassano del Grappa. By then Ray had been reassigned to Naples.

After VE Day, Ray and many GIs returned to the USA with plans to train for an assault on Japan. Fighting in the Pacific ended sooner than expected, and Ray was discharged in Boston. Ray stayed active in local veterans activities. He was a member of the Hopkinton American Legion and the Ashland VFW.