As part of their monthly breakfast at the Senior Center, Hopkinton's veterans were treated to a presentation by Arteriocyte CEO and Hopkinton resident Don Brown.

Brown was there to talk about his company's recent partnership with the US Army Institute of Surgical Research. Arteriocyte, a leading clinical state biotechnology company that develops proprietary stem cell and tissue engineering based therapies, will now be working with the US military to investigate new stem cell based therapies for orthopedic and related battlefield injuries using Arteriocyte's Magellan Autologous Platelet Separator.

Brown began his presentation with an explanation of stem cells and how they work.

"These are stem cells that we all have within our bone marrow, within our circulating blood, quite frankly, within our fat," said Brown. "If you inject them into a muscle, they help the muscle grow stronger and improve the firing capability of the muscle, but if you put them in a bone fracture, they help grow the bone. Finally if you spray them on open wounds, they help to regrow the skin."

He then explained how the self-contained Magellan unit provides the critical ease of use necessary for deployment in military operations.

"Our model of healthcare," said Brown, for the enablement of surgical procedures, is to take tissue from you, process it at bedside rapidly and give it back to the surgeon to deliver into the tissue for you and that whole window of time takes 15 minutes.

And it's the 15 minute processing time that is the key for military applications. Brown explained that before his company had made this possible, harvesting and processing the stem cells used to require a 9-hour surgical procedure down in a operating room.

"We are incredibly honored and humbled because the US military has adopted us for three clinical programs for combat wounded," said Brown.

According to Brown, the program has been reviewed by 13 US Senators and 20 US Congressman

"If we are successful, we are in the process to create a network called the Wounded Warrior Treatment Program," said Brown. "This is combat related trauma that we are focusing on."

Brown also told the vets what inspired him to start his own company.

"I also grew to the point that I thought I had more to offer than what I thought was being utilized, so I wanted to strike out my own," said Brown.

Brown said his goal was to change the face of healthcare in one particular area; the use of homologous tissue, for you, at the bedside. Brown said he felt strongly that he could improve care with this system. Arteriocyte was founded seven years ago and there was only one employee. Today,there are 75 employees, the company operates in 15 states, exports to 18 countries and enables 6,000 surgical procedures a month.

The vets were impressed.

"I thought it just fantastic," said veteran Eric Sonnett. "It's sort of like these guys have invented a magic elixir and it's a question of how we can use it as quick as we can and in the most places that we can. It was extraordinarily interesting. 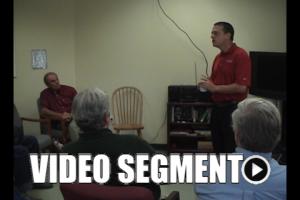