A museum, within a large bus, will be at the Hopkinton Town Common from 11-5am on Friday, May 13. Admission is fee to all. This event is being co-sponsored by the Hopkinton Public Library, the Hopkinton Historical Society and the Veterans Celebration Committee. This military history is being presented as part of Hopkinton’s celebration of May as Veteran’s Appreciation Month.

By the end of World War II some 425,000 German, Italian and Japanese prisoners of war (POWs) found themselves imprisoned in over 660 base and branch POW camps in almost all of the then-48 United States and the territory of Alaska. Millions more Axis and Allied POWs were held in other camps in Europe, the Soviet Union, Canada, Australia and Africa. While Axis and Soviet POWs were both the perpetrators as well as victims of dictatorial governments and state-sponsored violence, POW experiences on all sides embody ageless and timely themes of war and peace, justice under arms and issues regarding human rights, international reconciliation and future conflict avoidance.

The roughly 372,000 German POWs held in U.S Army-operated camps across the United States were sent out to harvest or process crops, build roads and waterways, fell trees, roof barns, erect silos, work in light non-military industry, lay city sewers and construct tract housing, wash U.S. Army laundry and do other practical wartime tasks. With the high rate of 19th-century German immigration to America, many of those who worked with POWs spoke to them in their native tongue; some even had relatives or former neighbors among them. In the process, they formed significant, often decades-long friendships with “the enemy” and underwent considerable changes as individuals and as a group – thus fundamentally influencing postwar German values and institutions, as well as American-German relations. A number of POWs even chose to immigrate to the United States after the war.

Using ten narrative panels and films about this story, TRACES’ mobile museum—a retrofitted school bus called the BUS-eum 3—will tour the Eastern Seaboard from August 2010 until May 2011, reaching schools, libraries, museums and historical societies. TRACES' BUS driver, Irving Kellman, will tour with the exhibit and is available for phone or live interviews as the tour progresses.

Barring unforeseen difficulties, the BUS-eum 3 will be in Hopkinton, MA from 9am to 3pm on Friday, May 13; it will be parked in front of the Hopkinton Town Common. The local contact person is Susan Marshall; 508-497-9777 or smarshall@cwmars.org

TRACES Center for History and Culture is a Midwest/WWII history museum located in Saint Paul, MN. Each of its more than two dozen exhibits about Midwesterners’ encounters with Germans or Austrians between 1933 and 1948 forms part of a larger mosaic, a fuller image of a war that is often misunderstood or seen in clichés. At TRACES, WWII is a case study to learn from for today and future generations.

To confirm the BUS-eum’s itinerary or learn more about this exhibit, see www.TRACES.org. The exhibit texts and photos can be previewed at that website; reading the narrative in advance facilitates speedier visitor flow in the bus. Educators are welcome to utilize any teacher material on our web site. 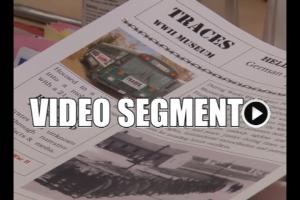