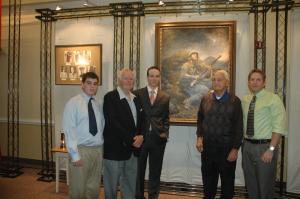 The first thing I knew that I had to do was to talk to them,” said painter Dustin Neece, at the moving ceremony held last night at the First Congregational Church, where his painting , “Honoring the Spirit”, was unveiled. The painting was inspired by the tale of seven Marines, all with Hopkinton ties, who fought in the battle of Iwo Jima and returned home.

Neece said he was approached a year ago to paint a portrait to honor these men.

“They opened up, they shared stories, stories that people hadn’t heard before,” said Neece. “This is my way of saying thank you.”

While the Marines are local, their story is not. The event in their honor brought together officials from the Marine Corps Marathon (MCM), a local Girl Scout troop, a Greek dignitary, Boston Athletic Association (BAA) officials, state and local officials, and many of their fellow veterans.

With a full slate of speakers kept on track by Master of Ceremonies Jacques LeDuc, the event opened with a welcome from Hopkinton Athletic Association President (HAA) Michael Neece who talked about the significance of the night.

Officials of the Marine Corps Marathon are in town to receive the Flame of the Marathon. Constantinos Orphanides, from the Greek Consulate in Boston, spoke of the sister-city relationship between Hopkinton and Marathon, Greece and the significance of the flame.

“Hopkinton did a great thing,” said Orphanides, referring to the establishment of Hopkinton’s sister-city relationship. “This flame will bring the spirit of the marathon all over in the United States.”

R.J. Dourney, Chairman of Hopkinton’s Board of Selectmen, said he was humbled by the presence of so many veterans. Dourney welcomed the officials of the Marine Corps Marathon and made them honorary citizens of Hopkinton.

Representatives from the BAA were also on hand and Executive Director Guy Morse congratulated Hopkinton, the HAA and the MCM for perpetuating the flame. BAA President Thomas Grilk had a lot to say about honored Marine Paul Phipps and all he had done for the BAA over the years.

I’m here for one reason and that reason is Paul Phipps,” said Grilk. “Paul made us just a little bit better than we thought we could be.”

Congressman Jim McGovern also attended the unveiling and spoke about the United States House Resolution he filed in conjunction with Maryland Congressman John Sarbanes. House Resolution 1704 recognizes the 2500th anniversary of the Battle of Marathon. According the HAA Executive Director Tim Kilduff, the resolution provides a fitting year-end recognition of the one of the most significant military battles ever fought.

McGovern also thanked the Iwo Jima veterans saying, “Your sacrifice has been captured magnificently in this painting by Dustin Neece.”

Following Jim McGovern, Hopkinton resident Nancy Burdick, representing Hopkinton’s Girl Scouts, spoke about the scouts’ involvement for the last few years with the Boston Marathon and Hopkinton’s sister-city relationship with Marathon, Greece. Burdick introduced the five scouts responsible for creating the “Go the Distance” earned patch, now known as the “Hopkinton Five” and framed copies of the badge were presented to select attendees.

Since the event was also the official welcome for the Marine Corps Marathon, it would not be complete without a response by its Director, Rick Nealis. Nealis spoke about history, tradition and dreams; concepts common to the Marine Corps, the Boston Marathon and to Hopkinton’s veterans.

“We’re making history on Friday,” said Nealis, referring to the transfer of the flame. “Thank you for trusting the Marine Corps to protect and transport the flame.”

One of the more poignant speakers of the night was Hank Allessio, introduced as the best friend to Hopkinton’s veterans. A member of the “Honoring the Spirit” committee, Allessio spoke about the inspiration for the whole event and recalled how the project started when he began collecting old photos of Hopkinton’s veterans.

“Any kudos,” said Allessio, “belongs to Jim Cozzens and to HCAM.”

With technical assistance from Cozzens, Allessio was able to catalogue the photos. From there, he went on to interview and film the vets and, during the process, discovered the connection of the Iwo Jima vets in Hopkinton. Allessio said he knew that the discovery, with it significance, coincidence and pride, could not go unnoticed. With support and assistance from Kilduff and Hopkinton’s highest ranking Marine Doug Kulig, the “Honoring the Spirit” initiative was born.

“Enjoy the tribute to our guys,” said Allessio.

To see the HCAM News video of the event, click here
To see photos from the event click here
(Michelle Murdock can be reached at michelle@hcam.tv or 508-435-7887).