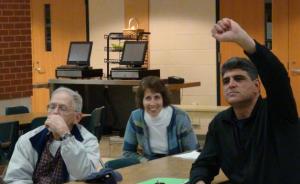 Preliminary plans for improvements to the downtown area were presented to residents in two recent public forums held by the Downtown Initiative Steering Committee (DISC) on Thursday, November 3 and Saturday, November 5. In both cases, the vision for Hopkinton’s downtown area was outlined by the town consultant, The Beta Group, in addition to a discussion of possible alternatives, underground utilities and drainage. The goal of the meeting was to hear back from the audience.

“This design is a fluid process,” said Nealon. “This plan is a living document.”

The meetings represented the community vetting portion of the project, which Beta Group has been working on over the last few months. The initial $400,000 in funding for the design phase was approved by Town Meeting in May of 2010, and in March of 2011, the Beta Group held a Blue Sky Session; a planning meeting to capture local knowledge and insights, to identify problems, safety issues and deficiencies, as well as positive features and opportunities for the downtown area from Wood Street to Ash Street. Input on design preferences and what people wanted the downtown area to look like was also collected.

The resulting vision for Hopkinton’s downtown area, as presented, included a balanced design, underground utilities, drainage improvements and respect for historic character while laying the groundwork for revitalization. What the plan did not include was any taking of private land by eminent domain and because of this, the intersection at Route 85 and Main Street was not straightened and the intersection of Wood Street and West Main Street, while improved, was not ideal.

This led to a discussion of alternatives as the consultants from Beta Group explained the challenges of the design, based on current traffic levels, projected increases in traffic over a ten-year span, and the wish to maintain a balance between functionality and appearance.
Feedback from residents at the Thursday night session was varied. Several downtown business owners were concerned about the number of on-street parking spaces which were being taken away under the new design. Other residents thought that straightening the intersection at Route 85 and Main Street should be a priority.

A copy of the Beta Group slide presentation is also attached below.

The next step in the process is the submission of a 25 percent project completion plan to the Massachusetts Department of Transportation (MASS DOT) and another public hearing to be scheduled in the future.