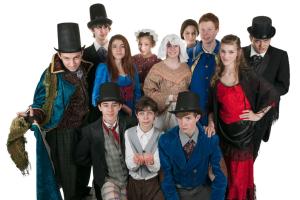 When Hopkinton Middle School students present “Oliver!,” themusical based on “Oliver Twist,” they will honor Dickens’ spirit through aneffort to help Project Just Because, a Hopkinton-based charity that helpsfamilies in need.

"While the abuses of Dickens’ workhouses are gone from civilized nations, many in our own neighborhoods are still struggling becauseof the poor economy,” said Hallyann Gifford, the middle school drama teacher and the show’s director. “This show is a great opportunity to remind students and the audience that they too can make a difference in their communities, as Dickens did.”

A cast and crew of more than 100 students will present “Oliver!”on April, 27, 28 and 29 in the Hopkinton Middle School auditorium, 88 Hayden Rowe Street, Hopkinton. Admission will be discounted by $2 for anyone who donates school supplies for children in need served by Project Just Because.

While Project Just Because runs a back-to-school drive every summer, hard-hit families can find it difficult to replace school supplies that break or run out during the school year. Especially needed are backpacks; stationery such as pens, pencils,crayons and markers; new underwear, socks and t-shirts; toiletries; gift cardsfor new clothes or shoes; educational software; dictionaries and other schoolitems.

“Oliver!” depicts the adventures of the orphaned Oliver --including his hardships in the workhouse, his adventures with a band of youthful pickpockets led by Fagin, and his change of fortune when a long-lost relative finds him. The show,which first hit the stage in 1960 in London, includes many well-loved songs,among them “Food, Glorious Food,” “Consider Yourself,” “As Long as He Needs Me,” and “I’d Do Anything.”

Showtimes are at 7 p.m. on Friday, April 27 and Saturday,April 28 and at 2 p.m. on Sunday, April 29 in the Hopkinton Middle Schoolauditorium. The full ticket price is $12 for adultsand $10 for students and seniors. The Project Just Because donation must be made at the time of purchase to get the $2 discount. Tickets will be available at the Middle School office or at the door.