Selectmen at their September 3 meeting voted to sign and send a letter to Governor Deval Patrick expressing their concerns with the casino process as managed by the Massachusetts Gaming Commission (MGC) and asking that the chairman of the Commission be replaced. The letter was penned by Ben Palleiko, but signed and supported his fellow board members.

“As a community that is potentially highly impacted by this law, yet completely disenfranchised from the process, the Town of Hopkinton has severe concerns about the pace, process and focus of the MGC,” wrote Palleiko. “We, therefore, ask that you take immediate steps to change the leadership and activities of the Commission in order to ensure that the new law does not damage communities and entire regions of the Commonwealth in pursuit of revenue, and that the high expectations for a fair, transparent and rational process are fulfilled.”

Reviewing the issue with the board, Palleiko explained that his letter was written after a meeting with the Director of Investigations and Enforcement Bureau of the MGC; a meeting that came about due to Hopkinton’s interest in the background checks on individuals associated with Foxwoods, and his dissatisfaction with the outcome of that meeting and the lack of information provided to Hopkinton after multiple requests.

In addition to asking that the leadership of the commission be changed, the letter also cites examples of what the board feels are flaws and failures of the Commission, including the decision which excludes surrounding communities from having any role in the site selection process despite the fact that they will be impacted.

“We are stunned that the concerns of the communities, and even entire regions, of the state can simply be ignored because of whims of any selected host community,” reads the letter.

Other complaints listed include the lack of response to public records requests, or providing information that is so severely redacted as to be useless, the failure of the MGC to meet its own deadlines for certain activities, the lack of public input allowed at public hearings and the release of hundreds of pages of background investigation reports on the morning of the suitability hearings.

“It’s a travesty,” said Palleiko. “It’s so ridiculously over the top that it became something that I could not tolerate any longer. So this letter is designed to be our next volley here, having gotten no redress for any of our concerns for many, many months now.”

“I think this letter is an excellent next step in continuing to explain, professionally, what is wrong with this process and what needs to happen to make it right,” said Selectman Brian Herr, who is also the Chairman of the MetroWest Anti-Casino Coalition (MWAAC).

“I have no hesitation in signing the letter,” said Todd Cestari. “In fact, I would suggest that the way this commission is acting is affecting everybody across the state and I would also suggest that we also distribute this letter to news outlets, both local and regional.”

To see the full text of the letter, click here.. 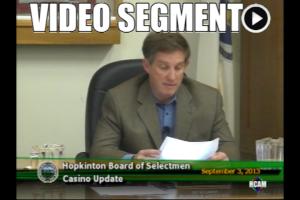